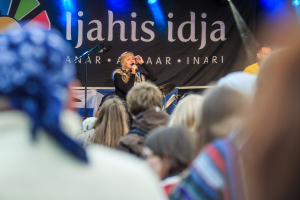 Activities in the multicultural Inari Municipality play a vital role in ensuring the optimum conditions to preserve its different cultures and to save both the material and non-material cultural and spiritual values.

Inari and its traditional events

Since 1974, folk musicians from different parts of Finland and Lapland as well as from the North Calotte have come together for the Ivalon Pelimannipäivät days at the end of July. Since 1987, the annual Lapin Kultaviikko gold week in early August has started at Lemmenjoki river. Inari Day at the end of August is spent discovering the local culture – traditional sacred sites, goldfields and Sámi areas… Since 1981, traditional jazz has featured at Kaamosjazz in Inari on the last weekend in November. Films and documentaries closely associated with the cultures of indigenous peoples have been shown at the Skábmagovat Film Festival at the Sámi Museum Siida in Inari village during the January winter twilight.

Inari and the Sámi culture

Inari is at the heart of Sámi culture in Finland. Representatives of the Sámi cultures in Inari have fostered the advancement of their own cultures and in doing so, they have also promoted the municipality. The Sámi Museum Siida, Sámi Radio, the Saami Parliament and Sámi church all reflect Inari’s three rich Sámi cultures.

INFORMATION ON THE ASLAK CINEMA

The ticket sale office opens half an hour before the showing.

Description of the Aslak cinema

The Aslak cinema is Finland's northernmost  cinema building still operating. In 2013, with the assistance of the Finnish Film Foundation Aslak was digitalised and now has modern image quality and technology that is capable of displaying 3D films and premiering films.

Aslak also hosts Event Cinema showings, which are a fairly new and strongly growing form of entertainment in cinemas. The digitalisation of presentation technology has made it possible to bring a diverse range of content to the screen. Event Cinema showings can be anything other than traditional films. Event Cinema  now includes operas, theatre plays, ballets, musicals, concerts, sports events or even art exhibitions. In most cases, the performances are produced specifically for cinemas and cannot be seen as such elsewhere. Event Cinema showings are newly produced recordings.

Ticket prices vary between 9 and 12 euros depending on the film, movie type and duration of the film. General tickets cost EUR 9. Tickets for films lasting over two hours cost EUR 10-12.

Advance tickets and movie gift cards can be purchased from the Inari Municipal Hall’s Info point on weekdays from 9 am to 3 pm. We recommend that in future customers pay their film tickets with the contactless payment feature on their debit card.

If you are unable to purchase a ticket in advance, you can leave a reservation at Aslak. Reserved tickets are to be paid on arrival. Reserved tickets must be redeemed no later than 15 minutes before the beginning of a showing.

The doors are opened 30 minutes before the beginning of the first showing and closed after the last showing begins.

We accept the following forms of payment:
- Bank and credit cards
- Cash
- SmartumPay mobile payment is already in use and has replaced the Smartum card payment option.
- Tyky payments with voucher, cultural vouchers and Smartum vouchers.
-You can only purchase film tickets using the e-passport from the Inari Municipal Hall Info point on weekdays from 9 am to 3 pm.

We also provide services to companies and groups, which we invoice. Contact the Municipality of Inari Secretary of cultural activities at mirja.karjalainen@inari.fi to book a group showing.

The Aslak cinema is also accessible by wheelchair. If necessary, the ticket vendor will assist you in crossing the threshold of the lobby. The theatre itself has one wheelchair ramp, which the ticket vendor will put in place if requested, or it can also be set in place by a personal assistant. A lightweight, mobile platform allows the wheelchair to be positioned more comfortably in a horizontal position. The platform is located at the rear wall to the right side of the theatre. An assistant can get attend the showing free of charge, when a person requiring assistance buys a normal ticket.

Unfortunately, Aslak's toilets are difficult for people with reduced mobility to use due to the age and structure of the building. The men's toilet is slightly larger, but the doors are small. This should be taken into account in advance.

An induction loop has been installed in the theatre to improve the sound for hearing aid users.

You can download the MovieReading app in the Play store for a descriptive interpretation of movies. The download and use of the application are free of charge, and the app helps people with poor vision to understand what is happening in the movie. The application describes what happens in the movie, it does not read out the lines spoken by characters.

Information on showings with subtitles will be provided in the Aslak showtime descriptions, in local paper Inarilainen, on the Inari website and on the Aslak Facebook page.

Parking spots are located in the immediate vicinity of the building. If the parking spaces are all full, use the neighbouring companies parking spots without interfering with their activities or blocking rescue routes. Parking is free of charge.

You can influence the cinema’s range of films by submitting your wishes via Facebook, by phone to the secretary of cultural activities at +358 40 7767546 or by e-mail to aslak@inari.fi or mirja.karjalainen@inari.fi.

The Finnish Film Foundation has supported the activities of the Aslak cinema in 2021.
www.ses.fi