The largest and the most beautiful

Inari is the largest municipality in Finland and one of the most international tourism destinations. Inari is located in the northernmost corner of the European Union, in the middle of the Northern Polar Cap. It covers 5 percent of the total surface area in Finland. 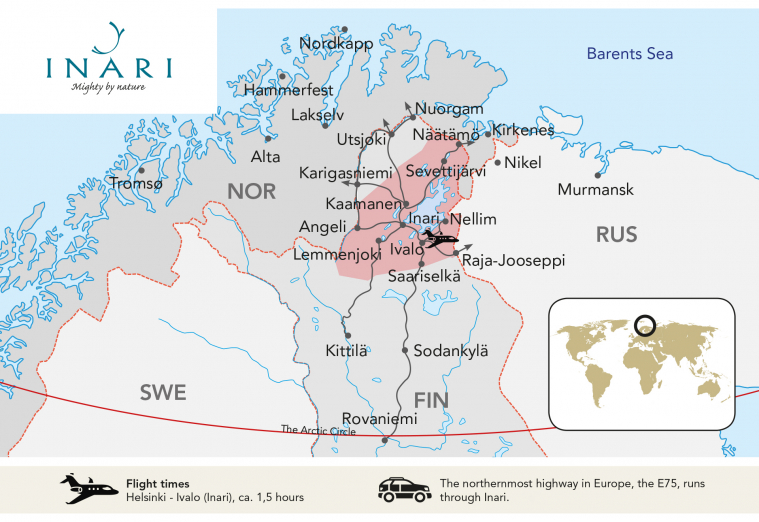 Inari neighbours Norway and Russia and has close co-operation with its bordering municipalities. Thanks to its central location Inari has throughout the ages been the meeting place of cultures and a natural route to the Arctic Ocean and Kola Peninsula. Some of the most northern official border crossing places of the European Union to Norway and Russia, and to the Barents Sea, can be found in Inari. These transport connections are called the Arctic Corridor. The status of Inari in the Barents Sea connections is further strengthened by its position in the European road network. Ivalo international airport serves annually about 250 000 visitors and offers fast connections to the rest of the world.

In the municipality three different Sámi languages are officially used side by side with Finnish language: they are North Sámi, Inari Sámi and Skolt Sámi languages. Almost one third of the Inari citizens are Sámi. Two thirds of the population of Inari municipality live in the village of Ivalo. The citizens and companies are supported in their international activities through training, active projects, improvements of the international operational environment and through contributing to the international activities of the companies and organisations.

Stunning nature in Inari makes it one of the most attractive tourism destinations in Lapland. Inari has over 100 named fells. The northern spruce forest dwindles out in the southern parts of the municipality due to the latitude and the pine forest in its northern parts. The forest and fell scenery in Inari is crossed by several water systems that flow northeast to the Arctic Ocean. There are over 10 000 lakes in Inari region. Lake Inari is the third largest lake in Finland. Its length is about 100 km, average depth is 14 metres and the deepest points go down to almost 100 metres. Lake Inari has over 3 300 islands.

Annually hundreds of thousands tourists visit our area and the travel seasons alternate smoothly with the four gorgeous times of the year. Saariselkä is a well-known ski resort in Finland where people come to experience also the magnificent autumn colours and the polar night with its Northern Lights in the middle of the winter. In summer visitors arrive in Inari to enjoy the Midnight Sun and to go hiking, trekking and exploring the vast wilderness or to go fishing on Lake Inari. In addition, Inari is a convenient place to stop when visitors travel to the most northern tip in Europe, North Cape. Inari municipality invests significantly in the development of tourism. Inari-Saariselkä Tourism Ltd is in charge of the travel marketing of our area and is partly owned by the municipality, together with local companies.

Besides the tourism industry and its multiple service providers the main livelihoods are  reindeer herding, fishing, forestry, training services and other private services. A new addition to the traditional business sectors in the past ten years is cold technology and especially car and tyre testing in arctic conditions.

In developing the livelihoods options in the coming years Inari will invest especially in arctic nature tourism, with the objective of standing out as the leading area in Europe. The second priority area will be technological know-how and, within that, cold climate testing (so called snow-how) and ICT technology in connection to the regionalisation of knowledge work. The third priority will be the utilisation and further refining of the natural resources in the area. Inari municipality will closely keep track of the possibilities for internationalisation offered by the European Union and will utilise them both through regional actors and independently.